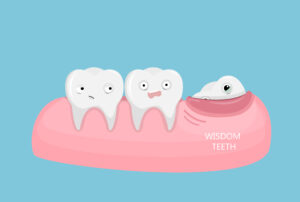 They almost seem like a rite of passage, a sign of adulthood. When you get wisdom teeth coming in, it can be exciting, and it can be worrisome.

It always seems like there are issues with them. They don’t appear to do too much good even when they are healthy. So why do we have them? If we are evolving, are our mouths as well?

It is easier to recognize if there are issues with your wisdom teeth if you know their history and  their biological function. It is important to keep a baseline of your body’s mechanisms, in order to properly identify if it is not working properly.

Today, your Livonia, MI dentist touches on the biology behind wisdom teeth so that you can properly monitor yours!

Our Mouths Have Gotten Smaller

The easiest explanation is that they are left over from older times, before we began to cook our meat. The raw flesh we consumed was coarser and tougher than when we currently eat. Also, we had to rip tendon and gristle from the bone as we ate, as we didn’t begin to use tools until later.

Because of that, our teeth had to be stronger, larger, and able to cut through the meat. Our wisdom teeth had a stronger power, with our wider jaw. This allowed us to rip using the more stable back of the jaw, placing more stress on the neck than the face.

We’ve Developed Quicker Than We Can Evolve

With the development of tools like knives, we began taking some pressure off of our jaw by creating smaller bites to eat. With that, generations and generations grew with slimmer faces, and that began to crowd the mouth.

Our teeth have become smaller since then, but the jaw has grown smaller quicker. And structurally, the teeth still need to remain strong.

We also began cooking our food, which softens most tissue, both animal and vegetable. The need for those four back molars dwindled to where they are today.

Does That Matter To Me?

Recognizing the development of wisdom teeth allows us to see where they can become problems. The mouth is no longer large enough in most individuals to fit these extra teeth.

They can begin to crowd the others, which pushes them out of alignment. This can cause damage to the teeth individually, as the collision between two teeth can cause them to crack. Also, the spaces between the teeth may become difficult to brush or floss, leading to tooth decay. This could require a filling or even a root canal.

It can also be cosmetically damaging. We spend our entire lives crafting a smile, these new teeth shouldn’t ruin how it looks! Beyond that, they can grow in odd directions, damaging the jawbone itself.

If your wisdom teeth need to be removed, it is best to know earlier rather than later. This way, your dentist can spot any issues before they arise, and extract them if need be.

ABOUT YOUR LIVONIA, MI, DENTIST: