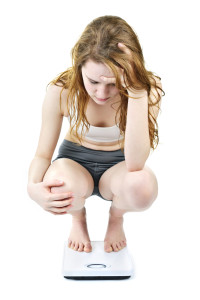 Eating disorders affect your oral health in two ways. By limiting food intake and/or purging, your body does not get the vitamins, minerals, and nutrients it needs. Under such conditions it cannot function effectively and may eventually completely shut down. In fact, the death rate for those with serious eating disorders who go untreated is as high as 20 percent.  Secondly, for those who purge, or vomit, the repeated regurgitation of stomach acid erodes the teeth.  Oral signs of eating disorders include: