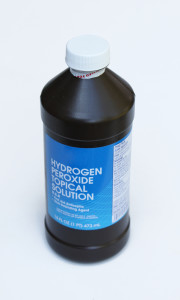 What Is Hydrogen Peroxide?

Hydrogen peroxide comes in different strengths. Weaker strengths are for personal use while the stronger mixtures are for industrial use.  The solution sold in stores is a three percent solution which means it is 97 percent water and 3 percent hydrogen peroxide. It can be used as a disinfectant, and as a bleach. It is stored in a brown bottle because contact with light weakens the formula. The stronger solutions are not safe for personal use

Hydrogen peroxide foams when it comes into contact with an enzyme called catalase. The catalase turns the hydrogen peroxide into oxygen gas and water at 200,000 reactions per second. The foam is tiny oxygen bubbles created by the reaction with the catalase.

Hydrogen peroxide has been used for years as an oral health care product. It can clean and whiten teeth, but more importantly it can help prevent harmful bacteria from building up on your teeth and gums. If the bacterial is not removed it can lead to gingivitis and possibly periodontal disease. By using one capful of hydrogen peroxide to one capful of warm water and swishing between your teeth for 5 seconds you can kill the bacteria on your teeth.

Hydrogen peroxide is an acid so do not use too much or over expose your teeth or oral tissues to it for more than 5 seconds at a time or it can dissolve tooth enamel and irritate your oral tissues. Children should not be allowed to use hydrogen peroxide because it is not safe to swallow. Swallowing can cause damage the throat, esophagus, and other internal membranes. Adults can use hydrogen peroxide as an oral rinse daily or several times a week in therapeutic amounts.

James R. Stewart, Jr, DDS, PC and our compassionate staff proudly serve patients of all ages from Livonia, Farmington Hills, Plymouth, Northville, Dearborn Heights, Garden City, and all surrounding communities. If it’s time for a professional cleaning, call our office today at (734) 425-4400, to schedule an appointment.