We have been hard at work training and preparing our office to start seeing our patients again and we look forward to welcoming you back starting June 1. We’ve missed you!! And by the response we have received this past week, you have missed us also. We hope this message finds you and your family in good health and we are working diligently to get many of you caught up on your oral health.

Your safety is of the upmost importance to us. Our office follows the infection control guidelines from the U.S. Centers for Disease Control and Prevention (CDC), American Dental Association (ADA) and the Occupational Safety and Health Administration (OSHA). Our affiliation with these organizations ensures that we are up to date with the latest recommendations and guidelines.

As you know, infection control has always been a top priority in our office and you will notice some additional measures that we have implemented based on current guidelines.

Here is what you can expect:

You will receive an email or text to fill out any necessary forms online.  This will make it more convenient for you and eliminate any paperwork in the office. One of these forms will be a COVID-19 screening questionnaire.

We ask that you please call us when you arrive and to wait in your car until we either call you or wave you in. Please wear a face mask. We will provide one for you if you don’t have one. Your temperature will be taken in the foyer. Only the patient should come in for the appointment if possible. One caregiver or family member may come in with the patient and they must wear a face mask and will be screened.

You will be asked to wash your hands or use hand sanitizer and then use a mouth rinse prior to your dental care. During your appointment you may notice some different devices that we will be using to help reduce any aerosol that may be produced.

We are excited to see you again and know that even though you may not see our entire face, know that we are smiling and happy to be back providing your dental care.

At the offices of James R. Stewart, Jr., DDS, PC, we look forward to providing you with comprehensive dental services for optimal oral health. We look forward to creating lasting, caring relationships with each of our patients for pleasant visits and lifelong satisfaction. Please contact us at your earliest convenience to schedule an appointment with Dr. Stewart at our Livonia office located on Middlebelt Road. We proudly serve patients of all ages from Livonia, Farmington Hills, Farmington, Plymouth, Northville, Novi, Dearborn Heights, Dearborn, Garden City, Westland, Redford, and surrounding communities.

We are working through rescheduling patients who had appointments canceled while our office was closed. Fill out the form below to join our appointment waitlist. 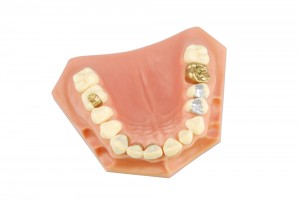 Were you one of those kids that dreaded going to the dentist? You did not want to find out that you had cavities and needed your teeth filled. Was it one of your greatest fears? Well, you were not alone. Over 90 percent of the population has cavities and 78 percent of the population experienced their first cavity before the age of 17. Not only did we not want to have our tooth drilled, or be trapped in the dentist chair for a long period of time, we didn’t want people to see our silver fillings when we opened our mouth. If you or your child needs a filling your Livonia, MI dentist, Dr. James Stewart, will be happy to discuss the pros and cons of tooth-colored filling materials.

Fillings During The Civil War

Can you imagine getting a tooth filled during the Civil War era? The tools field doctors had at their disposal included one turnkey, one gum lancet, two pairs of straight forceps, one pair of lower molar forceps, and the occasional stump screw. Doesn’t sound pleasant does it? Tin was the material of choice for dental fillings during the Civil War. We’ve come a long way since then.

Beginning in the early 19th century, metal materials were used for fillings. Silver, gold, and platinum were all used as filling materials. With time, gold and silver became the most popular. Gold was strong and durable, but not the most aesthetic choice, plus it was more expensive than silver. Silver, on the other hand, had the same advantages as gold but was less expensive.  But even as far back as the Civil War, there were questions regarding the mercury content in silver fillings. Silver amalgam fillings are a mixture of silver, copper, tin, zinc, and mercury. There has been concern regarding mercury causing health issues. Since then other filling materials were developed including composite resin.