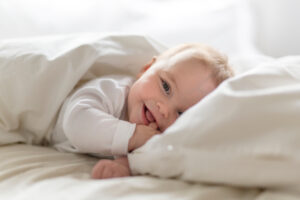 For new parents, and even for those who’ve been around the block before, children’s dentistry can be a little daunting. With all the things you have going on right now in your life, that’s understandable. But that doesn’t make it any less important!

Since infant teeth are designed to be lost, parents can believe that the health of this first set may be a little less important than our adult ones. But these track a path that helps alignment in the future. Paying attention now can make all the difference in orthodontic procedures in the future.

Today, your Livonia, MI dentist speaks to you about the dangers of baby bottle tooth decay, what it is, and how to best avoid its dangers!

Since babies do not have the same ability to swallow and close the mouth as adults do, young children require some additional help to keep their mouth clean. Bottle-feeding is a prime area where cautions should be taken.

It is best to avoid using any form of sweetener onto a bottle or pacifier, such as honey or sugar. While that may get them to take it in the short-term, it can cause not only damage to dental tissue, but also promote poor eating habits as they grow.

Leaving them with a bottle in the crib can cause them to have sugars in their mouth sitting for hours. This means that bacteria are allowed to grow without anything stopping them. And your baby’s immune system certainly has enough to handle on its own!

Using a cup itself is a beneficial thing for children to know. Start teaching them by the time they are around 6 months of age. The American Dental Association suggests a switch to a cup by their first birthday. Be sure to keep an open dialog with your dentist.

When you’re expecting or if you have a young child, there are a million different health issues for both them and the parents that are constantly swirling in your head. But some people tend to ignore the risk of decay for their children’s enamel.

It might seem obvious now, but there are a lot of problems that can be associated with this condition. Baby bottle tooth decay, also known as infant caries, can lead to discoloration. This often shows as brown splotches that will not wipe away. When this is left untreated, it can cause the child pain, so please do not disregard the symptoms.

It Can Cause Harm

You might be inclined to think that once the child has lost their infant dental set, that the previous condition no longer matters. However, children’s first teeth set a path that their later growth follows. When this situation becomes such a problem that the child requires an extraction, it can alter the way that the new teeth grow in.

This can mean crooked alignment in the future, which will most likely require othodontics for correction. While the situation might have not felt urgent, it can lead to seriously invasive and extensive procedures. So while I know you are always much too short on sleep, it is important to put that little bit of effort into keeping your child’s mouth safe.

ABOUT YOUR LIVONIA, MI, DENTIST: